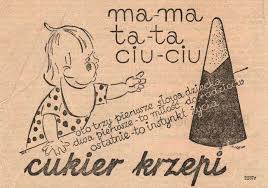 What is it about sugar? And how did Wańkowicz contribute to its consumption?

The year is 1931 and sugar is a very expensive and luxurious good. Even after its price has fallen, people are not buying it. What to do? Advertising as a lever of trade.

Why were the authorities of the time so keen to increase sugar sales?

The main reason was always the same – money. In the Second Republic, sugar was an excise commodity (for every 100 kilograms, a producer or importer had to pay as much as 37 zlotys to the state budget). Thanks to this, the state received income comparable to the annual expenditure on the maintenance and construction of all the country’s roads.

Source: Internet resources
“Sugar fortifies” – is the slogan that won the competition announced by the authorities of our country to support the sale of sugar.

“I received, I suppose, the highest honorarium in the world for the two words ‘sugar fortifies’ – 5,000 pre-war zlotys, or at the time $500 per word, that’s how valuable words can be”. Melchior Wańkowicz said. It is worth adding that the salary of President Mościcki at that time was around 3 thousand zlotys.

Melchior Wańkowicz’s slogan was linked to a visual message and there you have it. Advertising posters that filled the public space. Health, child, energy for action are slogans that few can resist. 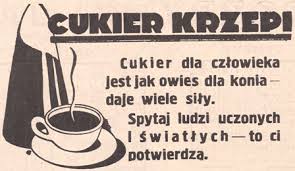 Source: Internet resources
And it happened. Sugar prices were falling and consumption was rising. For fear of incalculable consequences? Well, advertising is a lever for … sugar.

Today, sugar is almost everywhere. Even in products we wouldn’t expect to find it in.

Why such a sugar boom. After all, it is not advertising alone that has worked here.

This mechanism was shown in detail in the documentary film “All that sugar?”. The film is still playing on our screens. Mainly in arthouse cinemas. It is well worth a watch.

You can watch the film trailer here.

If you are not afraid to let your hair stand on end, take a look at the book “Sugar blues. Enslaved by Sugar” by William Dufty. After reading it you will probably banish refined sugar from your shopping list. Where can you find it? Here is the list and it is not at all complete.

Can poison make you healthier? I feel overwhelmed by information on the harmful effects of refined sugar. You only have to type “sugar” into a search engine to realise that “white death” is an apt term.

If sugar affects our brains like cocaine or heroin, why aren’t sugar producers and sellers in jail? Why is there so much sugar on our table? Has no one studied the effects of sugar on our health?

But they have. I encourage you to reach back into historical times.

“In 1793, a ship carrying a cargo of sugar was wrecked. Five sailors fed on sugar and rum for nine days. After nine days they were in a state of exhaustion.

The French physiologist F. Magendie conducted experiments on dogs, the results of which he published in 1816. He fed the dogs sugar and water-based food. All the dogs died.

The French physiologist’s survivors and experimental dogs proved the same thing – pure water can keep you alive for a while, sugar and water will kill you. (Elmer Verner McCollum, A History of Nutrition: A Sequence of ideas in Nutritional lnvestigation, Houghton Miiflin Co., Boston , 1957, pp. 87-88.

In 1957, Dr William Coda Martin sought to answer the question:

“When is food food and when is it poison?”.

And what conclusions did he reach?

“Refined sugar is ‘pure’, that is, it contains only refined carbohydrates. The body cannot utilise this refined starch and carbohydrate unless the removed proteins, vitamins and minerals are present along with them.

“In the body, pyruvic acid and abnormal sugars containing 5 carbon atoms are formed. Pyruvic acid accumulates in the brain and nervous system and abnormal sugars in the red blood cells. These toxic metabolites interfere with cell respiration, which cannot provide adequate oxygen for survival and normal body functioning. Over time, some of the cells die. This disrupts the function of parts of the body and becomes the beginning of degenerative diseases.”

The list of diseases caused by the consumption of refined sugar is very long. I see people in my office every day who are addicted to sugar. Sugar in various forms. And I might add that these are not healthy people. However, they do recover, those who want to.

Based on the book ‘Nutrition for Health’ by Paul Pitchford, I have written a download for you, the application of which will help you to tame your craving for sweets. You can find it here.

I wish you a life without sugar, but with good carbohydrates.
Dorota Nature of Life 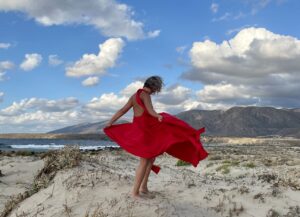 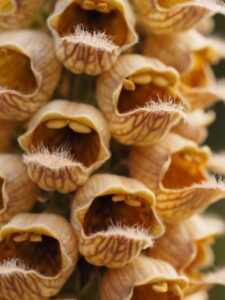 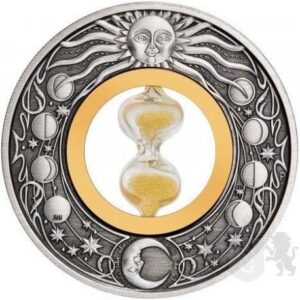 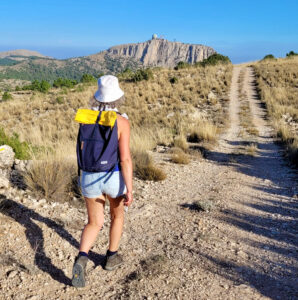 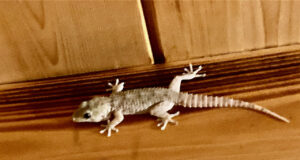 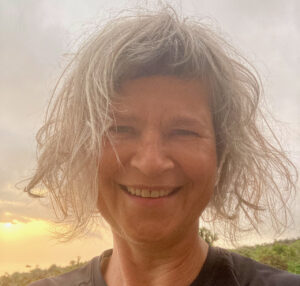